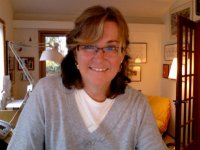 It’s time for you scallywags who’ve been clamoring for this interview to shut your gobs ‘cause my main mate, Jan, is here to entertain the lot of ya.
Jan Eliot as many of ya know is the creator of the syndicated cartoon strip Stone Soup. Stone Soup appears daily in over 200 newspapers throughout the United States and in six countries in Europe, the Middle East, and Asia.
Jan also happens to be me best mate. We’ve had weekly lunches for twenty-two years to sail into our respective creative waters and then land our projects. She landed on the equivalent of the New World. Do you know how many women cartoonists are working at her level? Twelve! What a buccaneer!
Ahoy, on with the interview.

So, Jan, let’s begin with an easy one. What’s your idea of perfect happiness?
(Laughter) Unlimited airline tickets with all the time in the world to use them.

Which historical figure do you most identify with? 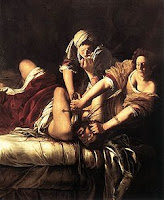 Artemisia Gentileschi and her ability to break out of anonymity in a time when women painters often had their work signed by their fathers or teachers. She painted one of the most famous versions of Judith beheading Holofemes, a theme embraced by many other women painters of her time. I have been on occasion fed up with patriarchy and can identify with that. And George Eliot because she was smart and lived life on her own terms… living “in sin”, marrying someone much her junior when she was in her 60s, and writing some of the best novels in literature.

Which living person do you most admire?
Paul Farmer, a physician from Harvard who founded Partners in Health, works on world health problems and champions health care for everyone worldwide. He worked in Haiti during medical school, creating model health systems, and is now working in Rwanda.

What is the trait you most deplore in yourself?
My wishy-washy nature. Thank you Libra.

What is the trait you most deplore in others?
Judgmentalism.

What is your greatest extravagance?
Trips to Africa! Or anywhere else in the world.

What is your favorite journey?
My trip to Africa with Ted.

On what occasion do you lie?
If I’m overwhelmed and cannot cope with any more requests or demands, I might say I’m not in town at that time or that I’m booked. Deadlines rule, and I really need time to fart around. You can’t be creative if you can’t fart around.

What do you dislike most about your appearance?
My neck, my double chin.

Which words or phrases do you most overuse?
Cool. Really.

What is your greatest regret?
Through ignorance, or immaturity, or whatever, hurting the feelings of friends. Things can’t always be repaired, and that’s sad.

What or who is the greatest love of your life?
Ted, my husband.

When and where were you happiest?
In Africa. I feel most free, most like I’m living a life of my own choosing, when I travel.

What is your current state of mind?
Calm, amazingly calm.

If you could change one thing about your family, what would it be?
That everyone get along. Just get along.

What do you consider your greatest achievement?
Stone Soup, my cartoon strip, and having two smart, accomplished daughters. I can’t take credit for them, but I’m proud.

What is your most treasured possession?
My suitcase!

What do you regard as the lowest depth of misery?
Not being able to travel.

What is your favorite occupation?

What is your most marked characteristic?
I’m an extrovert.

What do you most value in your friends?
Humor, loyalty, compassion, love, intelligence.
(to the right, you can see her sense of humor; Jan sent this to me because it reminded her of me and my husband; by Dave Coverly of Speedbump  fame) 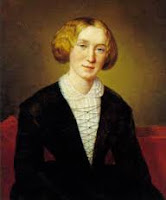 Who are your favorite writers?
Virginia Woolfe, A.S. Byatt, gosh, lots of writers. And, of course, George Eliot, my namesake.

Who are your favorite cartoonists?
Bill Waterson. Jim Borgman. Dave Coverly. Nicole Hollander. Claire Bretecher. Lynn Johnston. Victoria Roberts, a New Yorker cartoonist. Michael and Mary Leunig, brother and sister cartoonists from Australia who are not a team but cartoon separately. Michael is famous for his cartoons that run in the Melbourne Age, and his sister Mary does these dark, but extremely funny cartoons.

Who are your heroes in real life?
Anyone who serves the public. Teachers. They’re an amazing gift, and it’s an amazing feat to be a good teacher.

What is that you most dislike?
Bigotry.

If you were to die and could choose what to come back as, what would it be?
A writer or painter in 1920s Paris. Or a songwriter.

What is your motto?
Artist Judy Chicago’s quote: “Focus has nothing to do with limitation and everything to do with expansion.” That’s been my guiding principal in work and life; rather than limiting what you can achieve, focus makes the thing you finally choose to do so much bigger.

What question have you always wanted to be asked but never have?
I’ve always wanted to be asked, “What do you think you’ll do after cartooning?” I get tired of being asked if I “think I’ll ever run out of ideas.” I don’t think I will because I have a huge cast of characters and lots of stories to tell. It’s a never-ending story. But I may not want to write that story the rest of my life. And I think there’s another life still to be lived for me. I’m tired of being asked if I’ll run out of ideas because it’s kind of like “When will you be dead?” At some time, I may decide to do something entirely different for the next thirty years. Or I may continue the strip indefinitely but do more of it “from the road”.

Who do you relate to most in your strip right now?
Alix because it’s the end of summer. I hate when summer ends. I always want one more day at the lake. Of course, the answer changes depending on my mood and the seasons.

If you ever gave up cartooning, what would you do?
I would love to have the ability to volunteer during my last twenty to thirty years overseas with women’s groups or literacy groups or groups that build wells... anywhere I can be of service. I would love to spend my last years doing work out in the world for others, living in other cultures while helping at the same time.

You love Africa. What do you think your connection to it is?
I don’t know, really. I wanted to go to Africa when I was a teenager and never lost the desire. The movie Mississippi Masala has amazing footage of Uganda and Tanzania, and watching it made me want to go there specifically. I love the music, the songs, the landscape, the history, even though much of it is difficult thanks to colonialism. It’s our birthplace. Maybe that’s it.

You’re a Libra. Do you like your sign and why or why not?
I like Libra. I like my artsy self. But I get tired of being thrown into the freezing position when I have to make a decision. I get tired of constantly weighing options and possibilities, then being frozen. And I always regret the decision I didn’t make. Otherwise, it’s a great sign.

If you were God, what would you do right this minute?
Wipe out all the bigots.

Were you one of those kids who doodled on everything? What did you doodle?
I doodled on everything. I spent ten years drawing nothing but horse heads and bustlines. Women in beautiful evening gowns with big bustlines when I was ten, when I wished I had them and could only figure out how to draw them. And horses. Very cliché, classic girl stuff. It became more hippy-like and psychedelic over time. Eventually my doodles evolved into cartooning.

Pretend that someone is forcing you to add another character to your strip. Who or what would that be?
I might add a love interest for Phil to be competition for Val or at least someone she’d perceive as a threat. Or even a love interest for Wally, but he’d be clueless. He’d have no idea. It would be Joan who could tell this woman had designs on him, and Joan would take her on. That would be a lot of fun because Wally would miss all the cues. He’d be thinking, “Oh, she’s only being nice.”

In November, you’re going to Haiti with Habitat for Humanity and Women’s Build and with The Jimmy and Rosalynn Carter Work Project. Would you please bring me back Sean Penn?
You can bet if I see him, I will try to bring him back for you. If you promise to share.

To see Jan in action go to this PBS Oregon Art Beat link for the story they did on her and her cartooning.

Hope that tickles your yardarm! Until next time, I remain,
Captain Val

Coming Up!
What It Takes to be a Writer (besides a serious masochistic streak!)
My Research Trip to Paris: How to Let Go and Follow your Instincts
Confirmed Gossip and News from the Writing World

I so enjoyed this interview. You ask exactly the right questions, Valerie.

I am soaking up the Judy Chicago quote, and will post it immediately, with appropriate acknowledgement. Focus, dang it! (Me, not you). Fine interview. Thanks.

@Julia Whitmore Thanks, Julie! Yes, it's amazing that a quote can hit with such force! Loved our tea. Another next month, difinitely.

FROM MARYS VIA EMAIL:
Hi Valerie,

Thanks for this blog, one of your best! As a fan of Jan Eliot, I've been looking forward to it. I've loved her strip since it came out.

I've been meaning to write to you since your wonderful talk at the Newport Library. What a wonderful presentation you gave. It reminded me of a college lecture and I loved college lectures. And you gave us handouts and a bibliography too! What a delightful surprise! I really enjoyed meeting you. You were as bright and breezy as your blog. I hope you'll come back again!

I'm almost ready for tackling my first novel rewrite. I've spent the last two weeks re-reading all my "how to" books so it can be as good as possible before I start my agent hunt. I'm about ready to start hacking and slashing.

I hope your own rewrite of your current work goes well. I loved the tidbits you gave at your lecture and can't wait to read it (and find out nature of the 23 year-old secret.)

@writeonwithsheila Ahoy, Sheila, mate! Thanks so much for your comment. Ai, it was easy to ask these questions of Jan. My favorite question to ask in an interview is, "What question have you never been asked but always wanted to be asked?" She beat me to it! How's Liverpool?

FROM LOIS JEAN BOUSQUET VIA EMAIL

Love that Jan even more than ever! Thanks for the interview, Val