Sorry for taking over this week’s log, but someone had to.
You see Captain Val—how can I say this and not be judgmental—has had a very busy week and is now at her monthly writers retreat on the Oregon coast. I even asked the Captain if she wanted me to do this, but a shrug and a mumbled reply gave me no definitive answer as she sat there overwhelmed by 244 emails, all of which I think should be deleted. But no, she’s so responsible, she had to go through all of her personal email first, then her political, followed by (discrete cough) her social networking messages. She responds to the ones she can and connects with others, establishing her “online presence” as an author and—well, truth be told—filling her natural need to connect. Fine. But I’ll wager that by the end of the week, she’ll drop a few of the groups within the different sites because, well, I’ll be frank, she’ll find some of the chit-chat unnecessary and—big roll of the eyes here—she already networks in real time and space. Of course, she has other responsibilities, and I understand, but this?
I’m quite excited for the recent research she did for her work-in-progress (WIP in the writers world). (SHOULD be working on; get off the internet!) Oh, goddess, now she’s watching a TED video on the next-generation digital book. (Oh, my, that is interesting! Look at that. Amazing!)

I’m sorry, again. Sigh.
So, the research. On Friday, Captain Val visited Laura Lee at Redoux Parlour to research a local fashion design studio, interviewing Laura Lee, taking photos of the machines, the tables, the storage of thread cones, the necessities such as the industrial cutting tool that can whiz through six layers of fabric.

In her novel, the twenty-something daughter is a local fashion designer who is soon to head off to Paris to attend high couture school, or whatever it’s called. So I have no problem with her doing this type of work as it feeds me, too, and I fly around taking in everything Captain Val does, from the vintage clothing, to the bulletin board covered with design ideas. She may call on me when she rewrites the studio scene where all this research will land. I surely hope so. 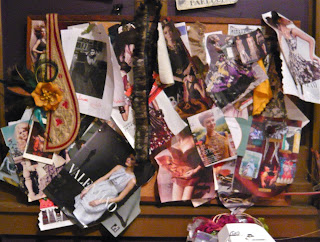 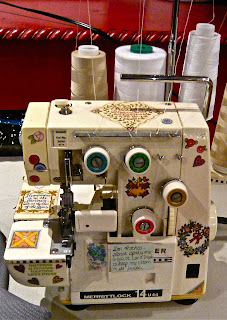 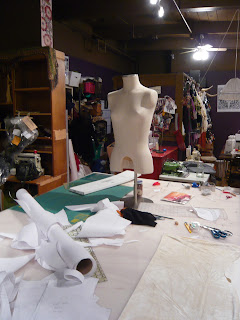 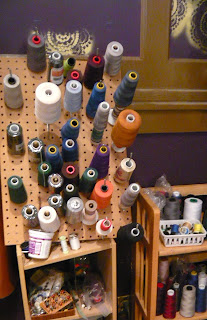 Oh, for heaven’s sake! Here comes that damned parrot. I cannot tell you how I would love to stuff this bird’s mouth. He sits on the Captain’s shoulder and proceeds to pontificate on so many subjects that he should be left on Fox Island where he’d either survive well or be eaten.
Brawk, brawk, brawk. He goes on and on about how Captain Val’s novel should be more multi-layered, larger in scope, filled with more vivid details, heightened with more literary panache (he uses these words! Does he even know what he’s saying?). His own long-winded narrative spiel should disqualify him from criticizing any writer, never mind his own Captain’s. That bird is a disgrace to the bird species. Plus, he distracts her with politics and family worries, tapping into a glut of guilt that already causes the Captain misery. That psittacine needs to be put out of his misery.

I must change subjects while I sit here waiting to be called upon. (In one of the Captain’s last logs, she called me flighty and that really hurt my feelings; I am only flighty when the Captain is distracted or overloaded. Is it my fault that I desire to be working, and I’m ignored?)
Enough of my complaints. Instead, I’ll share this bit of the Captain’s writing life.
In her work in progress, the two sisters have a mother we never see, but hear over the phone. (Isn’t there always a mom somewhere in a novel?) Well, just a few weeks ago, the Captain told her mother in a way of preparation that she had used details in her novel from her mother’s English background. These details are so rich and unique, I will not even divulge them here. As most writers do, they steal. Yes. Once when the Captain attended a residency at Hedgebrook Writers Colony, one of the writers, Jean Brody, told the younger women at the table, “It’s all grist for mill,” as the writers told alarming stories about themselves. Ms. Brody sat back with a knowing smile.
Recently when the Captain and I were sailing into port, we listened to author Jeffrey Eugenides who just published the novel The Marriage Plot talk on NPR’s “Fresh Air” about where his characters come from. He said:


"I don't write characters and base them on a person. What I do when I create a character is put in details from all the details I know who might be like that person and then put in a huge amount of myself.”

I’m not sure Captain Val would agree with that, but she does agree that the characters are always composites, that they may start out with one person in mind, but as the fictional dream is created and the character comes to life, the character takes on its own persona. Agree? What do you think?
Oh, and I must tell you this—hush, hush—that the Captain’s new escape, something that takes her to a different world from this pirate one, is the ABC show Revenge. One of her favorite film forms is film noir, and this has so many of the elements. Or maybe it has to do with her Capricorn moon or the idea that the show’s writers were told to develop an updated Count of Monte Cristo, but she loves the high conflict and characterization and the obvious analogy to our economic times when wealthy people do anything to keep their lavish lifestyle, including, as she says, demolishing the middle class. The show, set in the Hamptons, focuses on a young woman who enacts revenge on a family who set up her father to take a fall for a crime he didn’t commit.
Here’s the Revenge logline or summation that would be used for a pitch if trying to sell it to an agent or producer:


Revenge centers on a young woman who is welcomed into a community filled with people who don't know she's only there to exact revenge on those who had destroyed her family.

And for those curious, here's the trailer:
Oh, that damned parrot! He’s on a rant again. I’m done with that. Shoo, go away. Ha! I opened the door and he flew out.
Ah, you need me? My Captain needs me. Thank goodness. I must fly now. Thank you, Gobsmacked crew, for listening.
What? Oh, okay.
My Captain asked me to thank all of you. She now has over one-hundred followers aboard the Gobsmacked. Delightful! What a joy! She’s thrilled. Merci beaucoup.
Can’t wait to give her a little inspiration, because I’m good at inspiration and. … Coming!
Good-bye, all! Until next time.
Sincerely yours,
Sparrow
Captain Val’s Muse

p.s.
From IMDB Revenge page: Yes, the show is loosely based upon Alexandre Dumas' 'The Count of Monte Cristo', albeit transposed to the present day. Amanda Clarke (and her father David) stand in for Edmond Dantès; Conrad Grayson for Baron Danglars; Victoria Clarke for Madame Hermine Danglars; Frank for Lucien Debray etc.

Coming Up!
Interview with book reviewer Diane Prokop
Inside a Writer's Critique Group
My Research Trip to Paris: How to Let Go and Follow your Instincts
Confirmed Gossip and News from the Writing World