News and confirmed gossip for you, messmate writers and readers:


Seattle7 Writers Group member Randy Sue Coburn says she knows who “Sugar” on The Rumpus is. Arrrrrgh! I’m dying to find out. Will she tell? Nay! I love Sugar, a columnist for The Rumpus who is one of those straight shooters with heart. Stern, yet loving. She calls everyone “Sweet Pea.” What a great friend she’d make: she tells the truth while giving concrete advice on how to handle your woes and sniveling. (So, Sugar, if RS can figure out who you are, I’ll bet you’re somewhere nearby. Portland or Seattle?) Readers and writers will love Sugar’s column, “We are All Savages Inside,” where she gives “Jealous Writer” a good thrashing. Check out her link at blog’s end.
And if you’re not familiar with The Rumpus, don’t ask me what it is. It defies definition, although Wiki states it’s “an online cultural commentary site.” Snore! You really need to be there, in the experience, to appreciate it. Kind of like the ‘60s.
I’ll not be fergettin’ the Seattle7. They’ve taken on a new crew member (Should the Seattle7 change their name to Seattle7Plus?), one of my favorite authors and transplants to our watery Northwest, Erik Larson, author of The Devil in the White City: Murder, Magic and Madness at the Fair That Changed America.
Ah, now there’s a tale!
My favorite news of the past few weeks:
Here’s my gutsy new heroine—Lidia Yuknavitch. Besides writin’ a powerful personal tale that will swing ya round the yardarm, she stood up in front of an audience at Powell’s in Portland to read from her memoir—in fishnet stockings, a swimsuit, swim cap and goggles. She threw souvenir goggles to the hungry sharks in the audience. Lidia, a true buccaneer, spirited away these folks with a reading from Chronology of Water.
Read Debra Gwartney’s review linked below.
FOUND OBJECTS
Last Captain’s Log, I wrote ‘bout found objects as a way to set a writer’s ship to sail. In art, ‘tis easy to understand the use of found objects. Here’s what Wiki has to say:

“A found object, in an artistic sense, indicates the use of an object which has not been designed for an artistic purpose, but which exists for another purpose already. Found objects may exist either as utilitarian, manufactured items, or things that occur in nature. In both cases the objects are discovered by the artist or musician to be capable of being employed in an artistic way, and are designated as ‘found’ to distinguish them from purposely created items used in the art forms.”

I be suggestin’ that this idea belongs to the writerly craft, too, only the found object can be anything that makes itself known, that twinkles and flashes bright, and demands notice. At the time of “founding,” it may not figure consciously, but will later land in a writer’s work and can even be a piece of art that is used metaphorically, perhaps to elucidate the theme or represent an idea.
A few years back, I sailed to Seattle to spend a week with a friend. We was searchin’ for somethin’ to entertain. We bought tickets to a shadow-puppet play. We was gobsmacked. I’d just been at a month-long residency at Vermont Studio Center and had the great enormous pleasure of seeing the famous Bread and Puppet Theater group perform and met the founders. The two experiences combined for a lively discussion with my friend and so inspired her that, much later, a character in her now novel-in-progress took up puppet theater as her artistic road.
In movie making, found objects are called motifs. Perchance, writers do too, only I like the substance of using the term found object instead of motifs.
Are ya readin’ a novel or memoir now? Keep an instinct for something that lights up on the page like Venus in the night sky. A necklace made of pop tops. A heart-shaped rock. A pretty camisole fluttering on a clothesline in the breeze, then worn by a teen, and finally found on the floor of an apartment. Why is it there? Did the writer first see this on a walk through an unfamiliar neighborhood? What does a camisole represent? Sometimes, the meaning isn’t clear at first. Or right away, say, you sense the camisole represents vulnerability.
Here be another example. Last Log, I posted this photo: 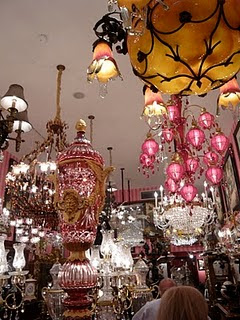 No caption. No explanation. Stumbling across those chandeliers in Miami grabbed me gut. I couldn’t shake the image. The store was floor to ceiling with expensive objects, from shelves of Fabergé eggs to Art Deco marble pedestals. But those chandeliers lit me up.
“Where did you find all these?” I asked the storeowner.
“I do not find them. People come to me.”
Really?
“The people need to sell. Times have been difficult.”
Ah! Here the rich sell off their riches. Maybe it’s me pirate blood, ‘cause I was entranced. Sure these trinkets are small doubloons for many, but for me chandeliers are prime booty, and not of the derriere sort. Chandeliers are motifs of the rich. Objets d’art.
I wonder where in my stories they’ll appear? But until then, they appear only here and in my treasure chest of found objects. So … until the anchor drops again in a land that glitters I am …
Faithfully yours,
Captain Val
Sugar on The Rumpus: “We are All Savages Inside”
http://therumpus.net/2011/03/dear-sugar-the-rumpus-advice-column-69-we-are-all-savages-inside/
Debra Gwartney’s review of Lidia Yuknavitch’s Chronology of Water
http://www.oregonlive.com/books/index.ssf/2011/04/the_chronology_of_water_review.html
Bread & Puppet: Cheap Art and Political Theater in Vermont
http://breadandpuppet.org/
Coming Up! (Keep laughin’, you scallywags!)
"The Fountain of Creative Ideas, or Why My Resume Wouldn't Land Me a Normal Job"
"Platform, Flatform"
"A View of My Writers Room Wall: What Inspires Me"
... and soon an interview with Jessica Maxwell of Roll Around Heaven
Posted by Valerie Brooks at 6:43 PM 8 comments