Ahoy, Buccaneers!
Busy on the high seas this summer? Ai, me, too.
This past weekend I was shanghaied by the Oregon Writers Colony crew to work at our annual Founder’s Day Celebration in Rockaway Beach. Saturday morn we offered a class on publishing non-fiction. After the noon meal, we gathered for a reading at the library followed by the dedication of a poetry pole at Colonyhouse, our OWC home. Sunday, fifty-five writers took over City Hall for presentations, book sales, good eats, and round table discussions. Here be the highlights according to yours truly:
At the Rockaway Beach Library

Library readin’s began wi’ Barbara Corrado Pope (Pirate Award here for her name). She talked about research she did for her new novel Blood of Lorraine. She’s a right fascinatin’ woman with a bounty of information, no bones about it. Here be an interview with Barbara, if ye be interested in anti-Semitism in 19th Century France following the Dreyfus Affair—oh, and a murder mystery. The story, besides being a damned good yarn and set in France, examines how suspicion and prejudice can seep into even those who fight against it. Forsooth, I be gobsmacked with her detail of place, a writer’s jewel of “place as character.”
Oregon Poet Laureate Paulann Petersen followed Barbara.
Ai, I be a pirate who loves poetry. As a writer, I chum me prose by reading poetry, lovin’ it for its musicality and imagery. Paulann be everything a PL could be—gracious, classy, great sense of humor, and a Buddhist stillness combined with a brilliant mind and creative blood. I bought her first collection. But before reading her poetry, she offered this quote from Meister Eckhart:

"When the soul wants to experience something, she throws out an image in front of her and then steps into it."

Shiver! And not me timbers. 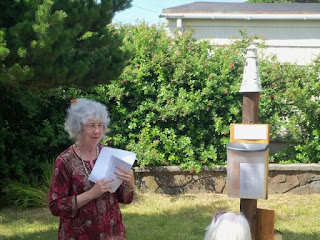 Later, she dedicated our Colonyhouse poetry pole. Not familiar with poetry poles? They hold sheets of poetry for those hungry for a slice. Just drop by and take a page.
On Sunday
Sunday at Rockaway Beach City Hall we opened the official Founder’s Day with author Bill Cameron. Blimey! What a funny bloke. A true pirate, that man! Readers can see his funny bones in the first few things he threw at us writers, includin’ this gem in the intro:
Writing is like religion; everyone has their own beliefs, so nay to right and wrong. Adopt what works for you. (I’m paraphrasing here, so correct me, Bill, if I’m a rogue and got it wrong.)
Here be a few of titles of his “rules,” copyrighted, and small wonder:
If ye be a writer and interested in his two page pdf with all the “rules” and a few good writer’s tips, go to his website, contact him and ask for Whydunit_2p.
Next, I sail the internet where I hear the latest on a few of me favorites.

His latest novel The Night Strangers is a creepy ghost story.
Alice Hoffman according to her page:

All the cover photographs on my new Kindle releases on Pisces Press are taken by me. I love making bookcovers!

Here be a few—

Maties, what do you think of the covers?

As a Francophile, I share Cara Black’s love of Paris. I gobble up her mysteries which are set there and have had the greatest fortune of spending time with her one afternoon and sharing our giddiness over the City of Light. The other day she posted this link on FB:
200-year-old Paris trouser ban for women may finally be repealed
Here at home …
… with me very own critique group. Huzza!
One of our crew has boarded the agent ship of Donadio and Olson, a NY topnotch literary agency. They say her voice is one of the most original they’ve read. Our-member-who-remains-anonymous is waiting to hear about her first novel that’s out with editors as I write. Her agent is not only taken on her novel, but she’s looking at her short fiction and has offered to help her with social media. Here’s a treasure chest if I ever!! I can’t tell you her name—YET—as we writers tend to be superstitious about announcing anything until the check is in hand (and even then, we still are wary). So cross fingers and spit.
… with me best pal
Jan Eliot, creator of the syndicated cartoon “Stone Soup,” will be traveling in November to Haiti with Jimmy and Roslyn Carter for Habitat’s Women Build. She’s been on a Women Build project in Thailand. Habitat uses her cartoon characters in their promotion. What a buccaneer! The question: does that mean Grandma in her strip with be travelin' to Haiti? Ah, me thinks she might.
… Your Captain’s News
This week I be off to the fine port of Waldport, Oregon to seek privacy for four days with a writer pal. I be headin’ into the final chapters of me novel and will immerse in all things non pirate to bring to life my last climactic scenes.
For now, I tip me hat to ye all. Thanks for bein’ on board and sailin’ w’ me. You’re a mighty fine crew!
Yours through storm and smooth sailin’,
Captain Val
COMING UP!
Fashionable Writer-Pirates: What They're Wearing This Season
Readers Beware! What you need to know about reviews and recommendations
What it Takes to be a Writer
And … an unusual interview with cartoonist Jan Eliot of “Stone Soup”
Posted by Valerie Brooks at 10:43 PM 3 comments