We are anchored in seas far from the Horn of Africa and those who give our name dread. Pirates have, in the literal sense, robbed and plundered other ships for centuries.
But our ship, this wordy wench, serves a different mission and flies a metaphorical flag. The word pirate derives from Middle English (peira) meaning “an attempt, attack.” What we attempt is exchange: your time for our words, whether they be fiction or non. We use words for cutlass and gunnery. If we attack anything, it will be preconceived ideas. We may roust ya from your comfortable beliefs or capture your romantic heart with a swashbuckling adventure. The mission takes a lifetime. No retirement for a pirate of our ilk. We bloody well die with pen in hand or keyboard on lap, but if we kill you at all, it will be with a tale so utterly tremendously moving, you’ll go back and read it again, because in the emotional pain you found a key to the door you closed on yourself many years ago.
As pirates, we offer only discovery.

Mates. Be warned. This will not be a pretty tale.

I’m talkin’ about this pirate’s personal adventures in raising the Jolly Roger on an elusive, tricky, constantly changing ship—the Publishing Galleon. If ye have the fortitude for hearin’ this, read on.

Writin’, for the most part, is a most joyful art. Nay, I didn’t say easy. I’ve heard it said that anyone can write, unlike painting. Whatever landlubber said those words should be tossed to the sharks. We’re not talkin’ drivel, mates. Years have passed learnin’ the craft in classes and workshops, applying for awards and residencies, attendin’ conferences, learnin’ all that has to be learned in this profession, reworking a fifth—and not last—draft, pages after pages never used, days of research for one bit o’ detail. You don’t just “be” anything. It takes education, experience, practice, mistakes, failures, successes, connectin’. ’Tis a royal pain in the ass, for certain. But thar be more on this later in the weeks to come. Today we attack publishing. And attackin’ publishing is like a solitary ship sent out to take the Queen’s Armada.
I begin my tale with my first novel, Can You Hear Me Dreaming, finished sometime around ’91. Or was it ’92? Before attacking the Publishing Galleon, ya need a hearty helmsman called an agent. By way of an Oregon Writers Colony conference, an agent took me on. High ho! I was hoistin’ me black flag.
After the agent sent my manuscript to NYC editors (back in the day when hard copies needed to be sent by snail mail and you had to reimburse the agent for these expenses, killing a tree in the process), an editor at Putnam said she wanted it. Ahoy, you could hear my triumphant shouts in Tasmania.
Off the agent sailed to the Big Apple. But after a meetin’ with said editor and other Putnam “people,” including the “marketing rep,” it was turned down. Avast! Those loathsome marketeers said they already had a novel like it in the pipeline. The valiant editor walked my agent to the elevator and said, “Tell Valerie she’s not just a writer, she’s an author.” Well, shiver me timbers. I’d live off that for a while.
Being a novice, I let my agents hand the manuscript back to me, their job supposedly done. I shelved the novel and went on.
My second novel, Parallel Crossings took years, but will be my pieces of eight, I swear. Aye, I was told repeatedly that I’d taken on the hardest structure to work with—parallel plots. I care naught what “they” say. Characters tell me tales, and I’m hooked. Two women, one from Civil War time, another from the Vietnam era, told me each their tale and how they interlocked. Could I refuse them? My readers along the route loved it, even when it wasn’t ready.

So while anchoring at Vermont Studio Center, a famous author championed my work and referred me to the grande dame of NYC agents, Elaine Markson, who accepted the novel and became my agent. Eager to meet her, I left my ship and flew to New York. A sharp, experienced woman with a list of famous writers, including Alice Hoffman, I just knew she could sell anything.
Unfortunately, after seven editors turned the novel down, she sent the manuscript back, saying maybe a younger agent would have the energy and time to devote to it. Need I say how I felt?
I let that novel go cold as a dead fish and started the novel I’m currently working on now. After a year or so, I pulled out Parallel Crossings and began revisions—again. After I finished, my readers assured me it was compelling and they “couldn’t put it down.” Now to find a new agent.
After many rejections, one agent sent me the following (aye, my wall is a collage of anything that keeps me going and here you can see a few comments by readers and a manuscript page): 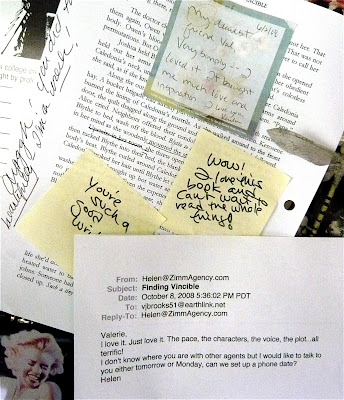 Helen and I worked on the manuscript together, changed its title from Finding Vincible to her savvy suggestion Parallel Crossings, attached a blurb from a New York Times bestselling author, and off it went. Over a year, Helen tried to sell it. The editors she submitted to were tops, her energy was amazing, and her communications with me kept me positive. I didn’t have to be told what a tough market it was, or that e-readers were changing the landscape of publishing, or that bookstores were in decline. Writers know these things. But after eighteen rejections and a few editors leaving their door open to a rewrite, we stopped.
And that’s where I am today. Writin’ my new novel and reworkin’ the second. Do I surrender? No, nay, ne'er.
But this tale is only the bones. So if ya curiosity is up, let me know what I can tell ya in future. Give me a hearty hello on the comment thread. As my shipmate, you have my ear.
Livin’ to tell the tale,
Captain Val
Coming Up!
"Dangerous Territory: the Mind of a Writer"
"The Fountain of Creative Ideas, or Why My Resume Wouldn't Land Me a Normal Job"
"Platform, Flatform"
... and an interview with Jessica Maxwell of Roll Around Heaven
Posted by Valerie Brooks at 5:48 PM 1 comments