Gobsmacked continues, maties with the tale of a writer's retreat interrupted by tsunami warning. Now you scallywags know that writing, as is pirating, is a dangerous profession. My pirate pal, Grace Castle and I are fleeing up the hillside from the impending tsunami.
__________________________ 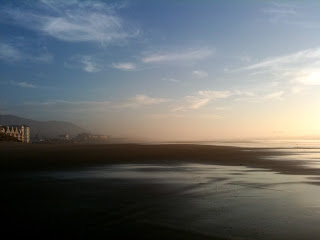 A man with a bottle of wine walked past, joking how he’d been pulled from the bar and was missing a pool tournament and the Detroit game. Someone yelled, “Save some of that wine for me.” I was surprised it wasn’t a bottle of rum.

Grace and I stopped a fireman and asked how high we were. “Maybe Seventy-five feet,” he said. “We’re okay here.” I looked back at the water. I wasn’t reassured.
I was, however, happy the earthquake hadn’t happened at the Oregon coast or there'd be no time to escape. Recently, a PBS program focused on the Northwest being overdue for an earthquake. Our fault line, the Cascadia subduction zone, causes a devastating earthquake every three- to six-hundred years. Indian lore agrees with the science. I remember when I first arrived in Oregon how lucky I felt; at that time there was confusion about the plates, and as explained to me at that time, the plates moved away from each other, so there was no possibility of a major earthquake in the Northwest. That, of course, was wrong.
Grace and I stopped and looked back. The ocean appeared to be far enough away, but I didn’t trust myself with measurements. Grace and I talked. No reason not to head up higher.
Near the top of the road we finally stopped at a newly graveled, vacant house lot. Not only did this look high enough from the ocean but it looked like the perfect place to set up camp. I checked my watch. Eight thirty.
The man next to us had his hands stuffed in his jean pockets and his suntanned face was tight with misery.
“Are you from Rockaway?” I asked.
“Yes.”
“Are you okay?”
“My house is about one-hundred feet from the ocean.” 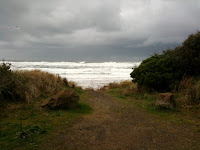 I didn’t have a house at the ocean, but I did have a car. More important to me as a writer, that car held my laptop and all my writing, including my novel. I’d left my external hard drive at Colonyhouse, so my laptop was my only hope. Even leaving my wedding ring behind didn’t matter at the moment. (I take my rings off when I work.) Truth is, I could replace a wedding ring, but I’d never be able to rewrite the novel.
Was my car high enough to survive the tsunami? Plus, I wondered why no one else was driving up to this vacant lot or the driveway behind it. I asked the man next to me how high we were.
“We’re okay here, maybe fifty feet above sea level.”
Okay, I wasn’t the only height-challenged one among us.
I turned to Grace. “I think I’m going to move my car up here.”
She nodded.
No one tried to stop me. No one even copied my move. I pulled my Honda into the gravel-filled lot and felt relieved. We would not only have our laptops, we’d have water and shelter.
As I slid out of the car, a young couple walked out of the woods with backpacks. Where the heck did they come from? They knew nothing about what was happening. We told them. Nearby, a young couple and their children were struggling, the mom pushing a stroller with a year-old boy, the dad carrying a three-year-old girl. They said they never heard the siren, the kids were asleep, and they were watching a movie. Someone called them. The mom couldn’t keep the blanket wrapped around her little boy. Neither she nor her husband had a jacket or blanket. Nearby, a woman who had seen better days was trying to hold onto five leashed dogs. When the young woman said, “What if we have to sleep here tonight?” to her husband, I told them they could crowd into my back seat. That started me thinking: Do we share our water? With whom? How much? How do we dole it out? Will we give the children our blankets and jackets? How long will we be here? Days? Weeks? How will we be evacuated?
Just as I was mentally preparing for the worst, a firefighter walked by and shouted, “The warning has been cancelled. There will be no tsunami. Everyone can go home.”
Grace and I looked at each other. What?
No one moved. Everyone had kept an eye on the ocean and now were suspicious of what it would and could deliver. Sure it looked serene, but how did they know there was no tsunami?
When people began to leave, Grace and I headed to the car, saying nothing. My mind switched gears. Should we go back to Colonyhouse right away? What if they’re wrong? What if there’s another quake? How will we find out if we have no television or radio? What do we do when we get back to the house? Do we stay? Can we sleep now? Should we go home? What do we tell our families? What’s the smartest thing to do? Is that the cautious thing to do?
At Colonyhouse, the questions changed. How are we going to feel if we stay? There was a quake in San Diego on Friday, now this one on Tuesday. Is this a series of quakes working its way up the coast? Are we next? Is this a prelude to the big one? We’ve spent money coming over here to hold up and write. Are we going to just throw that away?
Inside, Grace and I talked, but we had no answers. She told me about the time she was in San Francisco at a conference and a quake hit. Not being a drinker, she wasn’t in the bar that night and had no idea what to do during a quake, so she burrowed into her bed and fell asleep. Fell asleep? How did she do that?
Grace and I went back and forth—go or stay, go or stay? I called Dan. He said, “If you have to, go inland and get a hotel. Take your laptop and leave the rest. Then you can go back and pack up if you want to come home.” I hated to tell him there was no “inland,” that inland here is a hike up a mountain. I promised to call him when we figured it out. 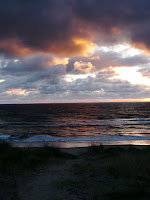 I made a cup of tea. By now I knew I was staying. I just couldn’t live in fear.
Grace finished the salad she left and then changed into her pajamas. She brought down pages of her novel to edit. I called Dan back to tell him about the woman fire department chief I met on the way down after the warning was cancelled.
The fire chief had said, “Rockaway Beach is the only fully tsunami-prepared community on the entire Northwest coast.”
I believed it.
After we hung up, I lay down on the couch and was reading a New Yorker article by Edmund White about the women he’d loved when Grace said, “I think maybe I should sleep in my clothes.”
I can’t sleep in pajamas or clothes, so when I went to bed at eleven-thirty, as I undressed, I laid my clothes on the other bed in the order they came off. If there was another evacuation, my clothes would at least be easy to jump into.
The next morning, we learned that the earthquake in Northern California didn’t produce a tsunami because the plates moved back and forth, not up and down like pistons. In the reports to come, I would learn about police having to block entrances to the beach of those who wanted to watch the tsunami in Coos Bay. Cannon Beach right up the road from Rockaway Beach experienced traffic jams and people had to abandon their cars.
The day after the tsunami warning, I wrote about the evacuation. I couldn't let the fear of a tsunami make me scared of the ocean. I just couldn't. An earthquake wasn't the ocean's fault. I had to do something that gave the ocean back to me, its life force, not its destructive force. I had to love the ocean again without condition because the ocean meant too much to me.
That afternoon, I walked down to the beach and the water's edge, and I danced. I let myself go, choreographing a modern dance with a few jazz steps. I leaped, circled, and swept across the sand.  And I didn’t care if anyone saw me. I danced and thanked the life force of the ocean, for giving us food, for giving us the tides, for giving us more than it took away. 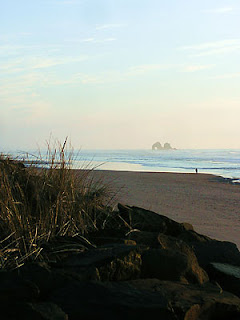 * * * * *
Ai, me love of the ocean is still in me heart. 'Tis the life blood of a pirate and I ne'er dismiss the pleasure it gives. Fear can only taint the well. Here's to the sea!
Yours,
Captain Val
COMING UP!
More News & Confirmed Gossip from the Writing World
Fashionable Writer-Pirates: What They're Wearing This Season
What it Takes to be a Writer
And … an unusual interview with cartoonist Jan Eliot of “Stone Soup”
Posted by Valerie Brooks at 9:32 PM 6 comments