Runnin’ for Me Life: Tsunami! Part 1 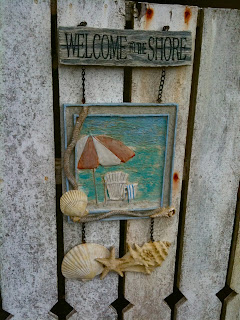 The June day was what the Brits call brilliant. Blue sky with powder puff clouds, sparkling ripples of ocean waves, an almost-deserted long stretch of beach. My face had that just-right sun-kissed pink from sitting against a driftwood log for a half hour, reading John Daniel’s Rogue River Journal, after finishing a day of writing. Once again, I was luxuriating in a writers’ week at Colonyhouse, the Oregon Writers Colony house at Rockaway Beach, Oregon.
After the beach, I ate a simple dinner and then decided to call home. Fellow writer Grace Castle was fixing a salad as I walked outside to call my husband. At eight o’clock, the June evening was still sunny and warm, and I faced a tranquil ocean. Dan and I were talking about our son’s job when a siren sounded, one that made my arm hairs stand up.
“Can you hear that?”
Dan said, “Yeah. Maybe there’s a tsunami coming.” He was half joking.
When the siren shut off, I said, “Whew. That must have been a test.”
We picked up the conversation where we left off, but half a minute later, the siren sounded again and this time stayed on.
“I need to hang up. This is serious.”
Inside, Grace was about to eat her salad.
“The siren. What do you think?” I asked.
Outside, nothing had changed. No cars. No people fleeing. Grace said, “If it’s an emergency, we’ll find out soon enough.” 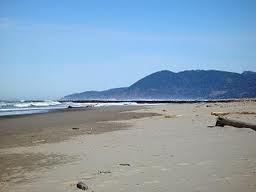 The sharp wail continued and sent me scurrying to the coffee table and the new tsunami brochures. Nowhere did the brochure say, “When you hear an ear-splitting alarm, run for the hills.” My reptilian brain said “Flee!” but my rational side said, “Don’t be wimp. It’s just a drill.”
I called three numbers listed on the pamphlet and reached, “If you know your party’s extension. …”
Grace calmly ate her salad. “If it’s not a drill, someone will come by and tell us over a loud speaker.”
At that exact moment, an emergency vehicle drove by, lights flashing, speaker system on. “Evacuate your homes! Tsunami warning! This is not a drill!”
Evacuate? Tsunami? Television images of the Asian tsunami flipped across my brain.
Grace and I grabbed laptops, tennis shoes, purses, blankets, and jackets. “We’ll take my car,” I said as we ran down to the road where the cars were parked. I had water in my trunk.
As I pulled away, I tried to remember where I saw evacuation signs. Which road would take us up the mountain? Before we turned onto Rt. 101, the emergency vehicle made another sweep of the area, and I flagged it down. “What road do we take?”
“Turn left onto Sixth.”
We did. Cars were leaving Sixth. It was a dead end. From a car passing us going in the opposite direction, someone yelled, “Third Street.” We turned around.
The siren continued to shriek. When we reached Third Street, the town seemed to be funneling up the road.
Up ahead, people left their vehicles in a church parking lot to walk up the hill. No one was giving directions on what to do. I wanted to go higher, but we came to a crawl as people walked in front of us. I decided to park along the road between the church and the fire station as no one seemed to be driving to the top of the hill. Grace and I put on our sneakers, grabbed coats, blankets and shoes. We decided to leave our laptops in the car. But what about the water? The family in the car in front of us was making similar decisions on what to take while one of their girls sobbed uncontrollably in her father’s arms.

Grace and I couldn’t lug the water, so we locked up, and joined the fleeing townspeople. One man had a cat wrapped inside his jacket. An elderly couple, both frail and white of hair, trudged silently beside us, the woman following the man. Neither carried anything. Someone had a radio handset so I asked what he was hearing. “We can’t hear anything. The frequencies are jammed, overloaded.” A man behind us said a Northern California earthquake was expected to cause a tsunami forty to forty-five feet high. I noticed a uniformed woman speaking on a radio and walked over. “How high are we right here?”
“About forty feet.”
I looked back at the ocean. Not high enough. I began tallying up everything we needed and didn’t have: water, flashlights, protein bars, warm enough clothes, waterproof matches, water purification tablets, first aid kit, candles, everything I keep at home.
My cell phone rang. “Where are you?” It was Dan. “I can’t believe I … … … Kristy just called from Portland … … … was being evacuated.” I told him what was happening and tried to reassure him we’d be okay, but the reception died. Grace tried to call out on her cell, but no signal. I thought of loved ones speaking to people in the Twin Towers before they were cut off forever. Grace and I put our phones away and kept walking.
We continued our climb and learned from others that the whole coast from California to Vancouver, B.C. was being evacuated. “Where was the quake?” I asked. Northern California, someone said, Eureka, no Yreka, no Brookings. On the border of California and Oregon. The tsunami was supposed to hit our coast around 9:26 p.m. I checked my watch. Only 8:23.
“This is what you could call an adventure,” Grace said.
“If we survive, it’s an adventure,” I said. “If we die, it’s a disaster.”

* * * * *
Ai, me beauties, it’s not over. The tale continues next week. And even then, it's not the end. There's another story that raises the arm hairs.
Until then, me maties, stay strong and bless the sea,
Captain Val
COMING UP!
Runnin’ for Me Life:  Tsunami! Part II
More News & Confirmed Gossip from the Writing World
A Fast Getaway in the Middle of the Night
And … an unusual interview with cartoonist Jan Eliot of “Stone Soup”
Posted by Valerie Brooks at 4:45 PM 2 comments