Time for The Muse: What Fashionable Pirates Will Wear This Season

I am Captain Val’s muse, and she’s asked me to fill in for her this week. I’m a little put out as I thought she needed me while she writes her novel’s last chapters. But, no. I guess she’s sailing solo on this, and I wish her all the best.
Hurrumph.
As she’s given me carte blanche to do as I please, I will, thank you very much. I do believe she has a bit of burnout at this juncture and needs a little fun. As Steve Jobs (yes, that one) once said, “It’s more fun to be a pirate than to join the navy.”
And as I’m quite good as her muse (not unreliable as she sometimes says, and not MIA when desperately needed; I mean, honestly, I do try, and it’s not as if I don’t have a life too), I’ve chosen fashion as my topic this week.
You see, I’m quite taken by fashion as art, how we find ways to adorn ourselves without looking like everyone else, which of course is difficult, I know. But I’ve a fondness for pirates, as you can tell by my choosing Captain Val (FYI: muses choose their subjects, not the other way around), and pirates love their dress. Yes, yes, they love their ship, their treasure, the cute little way they speak. But really, look at what they wear!
Now, here’s an inside bit you may not know about our Captain Val: she was inspired by one of her very early crushes:  Errol Flynn in “Captain Blood.” Was it his handsome bad-boy looks and behavior? Or is it true that the clothes (or in this case costumes) make the man? Well, have a look and judge for yourself. (The song accompanying the video? Perfect!)

Pirates have been an inspiration for—well, forever! (or as long as I can remember and I’m not that old of a muse) Pirate garb has even shown up on the New York runways. 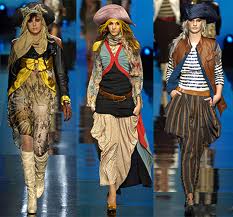 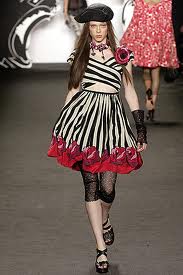 As for pirate costumes, Halloween will soon wrap us in our alter egos, and I’ll give a little free advert to this site as they have pirate costumes galore and this might  be my fave … 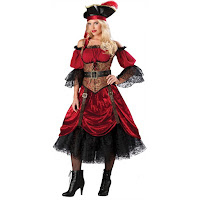 … although! I do wish this site, Gypsy Moon, still offered their “World’s End” collection. Ahhh. 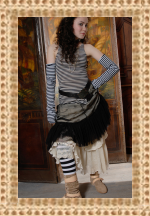 For the serious pirates out there, you will drool over this site from Europe: Pirates Cave. They offer custom-made pirate wear. Oh, my, I’m so … so … gobsmacked! To have a chest of gold to buy any of these! 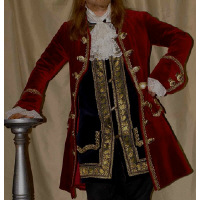 Ah, but thanks ToBeaPirate.com. More fitting for my purse. I’m rather fond of the frilly red Mary Read (ai, a pirate herself) set, but, oh, my Captain wouldn’t be.

She’d dress like the captain she is, although, I happen to know she loves the romantic look when she’s ashore, and this happens to be her favorite for being at court. 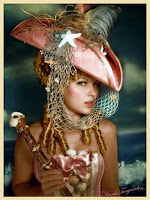 Oh, good heavens and North Star! I must fly. I’m late. I’m never late, well, not often, but right now, I must be off and let my captain once again take over her log. She’s promised to give you some juicy stuff in the next two weeks, including the interview with Jan Eliot, another pirate of the comic sort.
To you who love the swashbuckling life, I say adieu, and confess that if I had my way, I’d choose this swashbuckler for an amusing time. 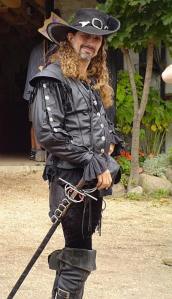 I hope you’ve enjoyed this fun little escape and as my captain often says, if we don’t have fun once in awhile, we can’t possibly be good at our jobs, now, can we. Until I'm called to rescue her again,
Creative Cravings and Amusing Musings to You!

From the Captain
Thank you, muse. As always, you either cheer me up or I can’t locate you (yes, honey, you do go MIA, but not often; I understand, really I do). But today, I’m back in fine fettle and have a few questions for my shipmates.
Have you had fun lately? Have you played with your muse?

And what would you name my muse? She seems quite lovely here, doesn’t she? I won’t, however, in the future let her take over the ship when she’s … cough … not so sweet and, let’s say, obliging.
But what, pray, is a muse without a name? I do have a name for her, but I’d like to see if you can guess it or top mine. If you do, there’s a surprise in me treasure chest for you.
A clue about her name: she’s named after a pirate who hasn’t been mentioned in this log. If you can’t guess it now, I’m gobsmacked.

COMING UP!
More News and Confirmed Gossip from the Writing World
What it Takes to be a Writer

And … an unusual interview with cartoonist Jan Eliot of “Stone Soup”
Posted by Valerie Brooks at 8:03 PM

There's a pirate whose initials coincide with the first letters of the alphabet, whose first name is the name of many queens - am I warm?

Then again, I was warm just enjoying the Errol Flynn montage and the last picture. Love me some long-haired men in black leather with big swords!

@Beverly Diehl Beverly, that made me lol! Yes, Errol makes me warm and the leather pirate--whew.

But, no. Will post soon, as soon as I post the comments that came in email. Thanks for taking part! Hoorah!
Captain Val

@from Chris Scofield via email I love Gobsmacked!
And I love the pirate fashion in this issue. Sexy beautiful clothes. Thanks for including the websites too.

I literally dropped my hand-sewing the other night when an ad for Captain Morgan came on TV too. Thank goodness modern pirates haven't succeeded at hijacking the fantasy!

@From Barb Sullivan via email:

According to the IMDB, Errol Flynn "was the great-great-great-great-grandson of HMS Bounty mutineer Fletcher Christian, whom he portrayed in the film In the Wake of the Bounty (1933)"--so maybe his pirating credentials were in the captain's own blood.

As for your question about fun: I'll have to look up that word in the dictionary to see if I still know what it means, but I'm pretty sure it would be fun to see you wearing one of these outfits next time we go to The Loft. I would hoist a hot buttered rum in admiration, or whatever it is that pirates drink. (Uh oh--I may have just given the muse another blog idea!)

Oh my...I'm just not pirate-savvy enough to even guess. But I'll make a stab (so to speak): I'm guessing Jeanne-Louise, a medieval pirate of France. But if I was going to name her, I'd call her Sadie! But now I want to know what YOU named her! Love the dashin' fashion!
Bisous, K.

@Ms. K @ Write On Thyme Ah, why didn't I think of that?? Love the name Jeanne-Louise. But nay, 'tis something else. And she'd wear this dashin' fashion, for certain. I've given a hint in my latest Captain's Log. See what you come up with if you change the gender. :)

Loved this.. reminded me of writing something similar a while ago, but I didn't post. One day maybe. Of course, Mr. Flinn was indeed dapper as a pirate, but now Johnny has captured everybody's hearts. As noted, my muse's name is Tobias and he is indeed a fine lanky gentleman, well most of the time. As you know muses are rogues and not dependable, ever.

@brenda Thanks, Brenda! Love your name for your muse. Let's hear from him! I bet he can tell some tales. But yes, they're not dependable. Ever! lol