News and Confirmed Gossip from the Writing World

I’m anchored in Rockaway Beach, finishing my novel (two chapters to go) and have been derelict in my Captain’s Logs. But the writer’s life for me! Here be your latest news, confirmed gossip and tip for the week.
* * * * *

If you’re curious about what’s really going on in the world of publishing, you must buy the October issue of Vanity Fair and read the article (not published on their site, though), “The Book on Publishing,” a tell-all, current story about how one book was published. Includes anecdotes (an agent on crack? Really!) from inside the publishers world. Shocking. Amazing. Bewildering. Nevertheless, writers will always have to write. Whether they go with the traditional route of publishing is another story.
* * * * *
For book lovers who want their authors live and wish to sail in the same seas as them, here’s your chance.
Wordstock Festival!
This weekend, Oct. 6th – 9th
Portland Oregon Convention Center, 777 NE MLK Jr. Blvd.
Wordstock Festival presents a super fest of authors and publishers, small writing workshops and BIG readings. Here’s the schedule of authors and workshops. These are just a few of the amazing (and my favorite) people who will be there. Huzzah!

Steve Almond
If you’ve never heard of this zany, brilliant guy, you’re missing out. He just published God Bless American and here’s the blurb from his publisher’s page:


From a “gifted storyteller” who delivers “always enjoyable, often hysterical stories” (New York Times Book Review) comes a meditation on the American Dream and its discontents. In his most ambitious collection yet, Steve Almond offers a comic and forlorn portrait of these United States: our lust for fame, our racial tensions, the toll of perpetual war, and the pursuit of romantic happiness.

His satirical book trailer is worthy of pirate praise and future lore as he subverts the robber barons at Fox News: 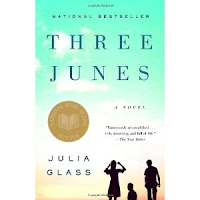 Double your pleasure with two of the best. I loved Diana’s Arabian Jazz  and Origin, and her new novel Birds of Paradise is garnering rave reviews and sits in my reading stack.

Julia Glass is author of one my all-time favorite novels Three Junes. A blurb: An astonishing first novel that traces the lives of a Scottish family over a decade as they confront the joys and longings, fulfillments and betrayals of love in all its guises.

Michael Ondaatje
Yes, the one who wrote The English Patient. ‘Nuff said.

Isabel Wilkerson
Isabel won the 1994 Pulitzer Prize for Feature Writing for her reporting as Chicago bureau chief of the New York Times. The award made her the first black woman in the history of American journalism to win a Pulitzer Prize and the first African American to win for individual reporting. The Warmth of Other Suns  is her first book. Check out this video.
David Rocklin
My new favorite, David Rocklin rocks with his new novel The Luminist. From Powell’s website:

In Colonial India, at a time of growing friction between the ruling British and the restless Indian populace, a Victorian woman and her young Tamil Indian servant defy convention, class, and heartbreak to investigate what is gained and lost by holding life still. Suggested by the life and work of photographic pioneer Julia Margaret Cameron, David Rocklin's novel The Luminist (Hawthorne Press) examines 19th-century Ceylon through the lives of an English woman and her Tamil apprentice. 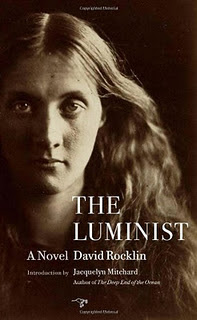 Check out Unabridged Chick for a saucy review. She compares the writing to A.S. Byatt's.

What’s With American’s Sexual/Literary Hangup?
If you like sex, both in your life and in your literature, here’s a panel that is primed to talk about it on Sunday at 11:00 a.m.: Cheryl Strayed, Steve Almond, Lidia Yuknavitch, and Viva Las Vegas.

From Kurt Vonnegut—advice on what you should write about if you’re a writer:

Find a subject you care about and which you in your heart feel others should care about. It is this genuine caring, and not your games with language, which will be the most compelling and seductive element in your style. I am not urging you to write a novel, by the way -- although I would not be sorry if you wrote one, provided you genuinely cared about something. A petition to the mayor about a pothole in front of your house or a love letter to the girl next door will do.

If you haven’t tried naming my Muse, you have two more weeks! Thanks to all who have guessed. Here’s a hint for those who have tried:  Forget gender; one word. Now try again! There could be a little prize involved. Har-har!

Coming Up!
Gobsmacked Wins Awards, Gives Awards, Starts the Buccaneer Award!
FINALLY! Interview with Jan Eliot, creator of Stone Soup—and it’s a good one!
What It Takes to be a Writer (besides a serious masochistic streak!)

Posted by Valerie Brooks at 5:09 PM

Thank you so much for featuring my interview with David Rocklin!

I've got a guilty love for Vanity Fair, so I'll definitely pick up that issue -- pretty glossy pics plus publishing gossip = YUM!

@Audra Audra, you're so welcome! Thanks for writing it. Yes, I love Vanity Fair, as you will see in a future post. Yum, indeed.

@Maryse Goebel by emailGood morning Captain Val! or Ahoy, there!

Just read your blog. I love the days it comes and save it for the last of my morning emails, to enjoy it the most.

Your saying you have 2 chapters to go on your novel brought back the memory of the past few days. I just finished my first novel last night. I'm still smiling at my own accomplishment.

Good luck writing your last two chapters. I found that those last two were the most difficult as my mystery raced to its "stunning conclusion," frantic to capture up all the loose ends and provide my readers with a satisfying read! It was a bit like trying to capture a french braid and get all the strands tied up tight. (I'm hopeless at hair and therefore have a very short cut myself.) The last chapter was the hardest as I worried that I wouldn't know when to stop. Then suddenly, there it was. The perfect stopping place. Done. Oh joy!!

So good luck in Rockaway Beach. Hopefully no tsunamis will interrupt!

Thanks for the tip about Vanity Fair. I'll pick one up today. I love reading about the publishing world.

I'm looking forward to meeting you in person at the Newport Library later this month!

@To MaryseWow, Maryse! Congratulations on finishing your novel!! If I had guns on board, I'd give you a right proper salute.

I'm always so intrigued with how my fellow writers finish their novels. Yes, those chapters are the hardest. I love your analogy to creating a French braid. I'm hopeless at that, too, but I never wanted to be a hair dresser, or whatever their called nowadays. (Hair stylist?) Not only are the last chapters difficult to bring to a conclusion without tying it up too much or missing some crucial element, it's psychologically unnerving. The novel is done? The novel worked? Readers will love my characters? I'm really really done? I have so much empathy as I head into the last chapter, or so I think it's the last chapter. I wrote an emotional chapter yesterday, read it this morning and cried, thought maybe I'm just plugging into something my readers won't feel, etc. etc. etc. But I think it's a good sign.

Thanks for the best wishes. And you don't know how much it means to hear you say how much you love my blog. I really love writing it and think about when it goes out who is reading, what they're thinking. I once was told that if I wanted to picture my reader, picture my novel on a bedstand, ready to read. Who is it who picks it up? With my blog, it's similar. I picture someone at their computer and hope that they see my blog, it makes them happy, and they don't just hit delete. Thank you for giving me this new vision of you saving my blog until last, to "enjoy it the most." That makes my heart sing!

How wonderful I'll get to meet you in Newport. Please introduce yourself. I'm looking forward to the workshop and being in Newport again, one of my favorite coast stops.

From Sybilla Cook via email:
Bonny Anne? after Anne Bonney?

@from MaryseWhat a lovely long response! Thank you. Yes, you can use my comment in your blog.

How lovely of you to share what you feel as you wind up your work. I bet other fans would enjoy hearing about that.

I, too, have cried when reading one of my emotional chapters. I get so involved with my characters, that I feel everything they feel. It leads to emotional overload, all that empathy. It's one thing to deal with our own emotional upheavals in real life, but now we're feeling everything all the characters are feeling in the story. Anger, fear, heartache, uncertainty, joy, love, lust. Whew! No wonder we're exhausted! :) But I do love it and don't regret for a minute giving up my practical life for this creative one!

May your muse be with you!
Maryse